A flood of road companions!

A day to share with travelling companions! When I do solo expeditions like this, I expect to spend long lonely hours on the saddle, but fortunately I am happy with my own company, always fully occupied with inconsequential thoughts. But today was different…..

During the long approach to the famous Lindis Pass (965 metres) I teamed up with the ABC family (Anna, Bob and Christine) and we helped each other with draughting. When the climb reared upwards, I found myself breaking away and then…….from nowhere, some large insect (probably a bee) struck me in the face and within a few minutes my lips and cheek began to swell up. The numb feeling was akin to what you get 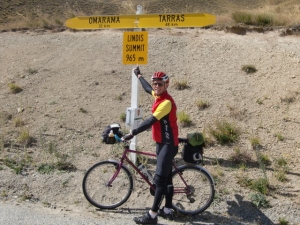 in the dentist’s chair, awaiting a deep filling or extraction. An hour later, I could feel it disappearing.

Over the top, down the other side………….and blast! that headwind coming from the south was still with us……which meant pedalling again just to go downhill! It was that sweet Mother Nature again…………….. The first settlement in over 50 miles was Tarras, and a little congregation of cyclists was beginning to form, sharing stories of the road, and giving tips about the route ahead.

One Czech family of three were cycling South Island with their little boy of only 18 months! Two lads from Belgium were taking a year off to cycle the world. A young Japanese lad, with little knowledge of English, was spending two weeks cycling between Christchurch and Queenstown. And, of course, my ABC friends were half way through their year’s journey through the continents of the world. Some of all this made my little journey seem small and limited.

But the run down into Cromwell had us going full face into a strong southerly wind, and the only way to survive (with a smile) was to work as a team. And this we did. There is nothing to compare with the camaraderie of cyclists on the road. Wherever you are, there always seems to be a natural bond. 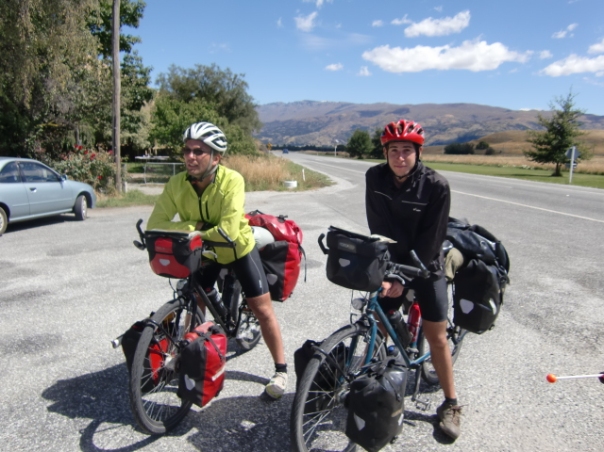 Working as a team against the wind

To donate to the Children of Syria: www.justgiving.com/Frank-Burns1