← A critical moment survived!
Back on the road again… →

So, what’s the score, you may be wondering. Maybe like some of you (three perhaps?), I too have been waiting with bated breath, fingers and toes crossed……
R&R Sport kindly took it in hand to disassemble the bike in preparation for the welder. I was waiting at 8.30am for them to open. I argued and negotiated with a bus driver to let me on with the bike (a prominent notice did say “no bikes”!), went 10km to a neighbouring town, dropped by this place unannounced

gave a heavily embroidered sob story, won over the bossman, and he offered to do it immediately. And so he did

and half an hour later I was presented with this

Now those of you who know about these things will understand that a severed lug on a bottom bracket is potentially a very dangerous thing. In other words, I am exceedingly happy (sitting by a public phone booth tapping into free WiFi) to be able to recount this story, because the outcome could have been very different.
So with all the kit back on, it looks almost like a normal bike, but for the industrial-looking weld 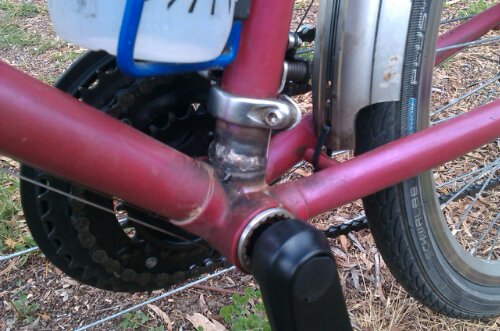 So the journey resumes tomorrow, not over a 110km rough gravel track as originally planned, but along state highways. Don’t want to test that weld to the limit.

Having a day off the bike almost makes you prone to non-motion sickness, but at least Queenstown has been a place of considerable intrigue. All the adrenaline pumping activities can do serious damage to your economic health: imagine a 143 metre bungy jump that will set you back £140…..that’s £1 per metre! And some know-it-all physicist will tell how much per second…..
A full day of scenic flights and lake cruise will say adios to £600. The Kiwis know exactly how to seduce people to part with stashes of  cash.

Talking of cash, I want it to be known at the highest levels of linguistic endeavour that I have coined a new expression in the English language: “the drive-by donation”. I have become so adept at receiving donations from passing motorists, that I am considering becoming Wiggo’s (sorry, Sir Brad’s) personal domestique in the Tour de France…..just so I can go and fetch his bottle from the team car (and have a little illegal tow to boot!).
Try a drive-by donation at: http://www.justgiving.com/Frank-Burns1

← A critical moment survived!
Back on the road again… →