The bubble of the illusion has burst. I fondly imagined that in Vienna I would breeze into the booking office at Central Station and book trains, there and then, right through to the Hook of Holland, from where I would catch the ferry to Harwich, and be back in England ‘in a trice’. Well, that was the plan…… but the bike thwarted the plan, given that these were inter-city trains. The most they could do was guarantee my arrival in either Munich or Düsseldorf, but beyond that, there was no provision for the bike. So I had to capitulate and book a flight with Austrian Airlines.

It would seem the only way to guarantee transit on multiple trains across Europe is to have a folding bike, which could be carried on as hand luggage. But how remarkable it is that when you are confronted with a need, a solution is sometimes put before you. 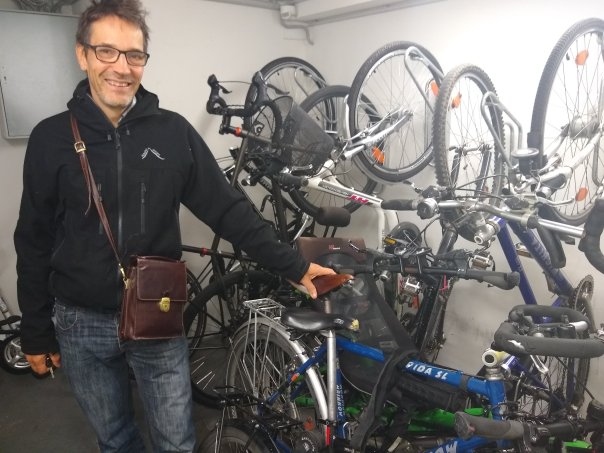 Stefan, my host during my time in Vienna and a multiple bike owner himself, offered to let me test ride his folding Dahon, a small-wheeled versatile bike which can be adapted for touring and carrying luggage. I’m already familiar with the Alex Moultons and Bike Fridays of the small-wheeled world, but Dahon are a bit of a mystery. 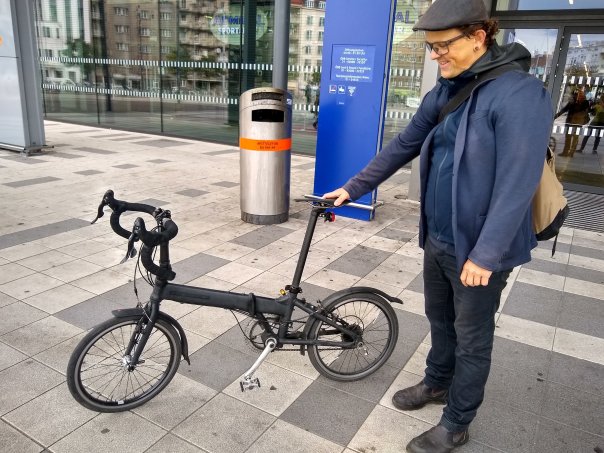 Andreas with his Dahon

Then in the city centre I bumped into Andreas who was not only a proud owner of a Dahon, but had cleverly equipped it for the long distance stuff, and was a firm advocate for the nimble small-wheeled bicycle. With a quick flip of two levers, he folded it in seconds, and then demonstrated how he could detach the pedals with his fingers. As we parted company he shouted after me “Make sure you try out the Vitesse”. In fact, he was quite prepared there and then to let me test ride his own machine. 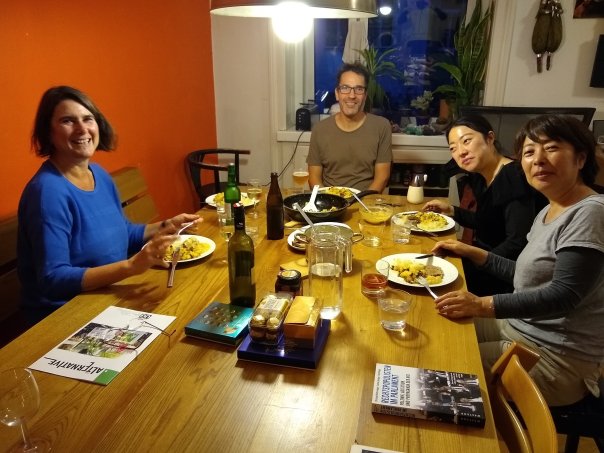 Staying with Stefan for a few days has brought me into contact with his other lodgers. He regularly hosts foreign exchange academics, and in this instance Kyoko is with him, a Japanese visiting fellow at Vienna university (whose mother Kaoro has come out to join her).

And Gudrun from Cologne, a university professor, who has recently co-authored a book about the rise of right wing populism in Europe, 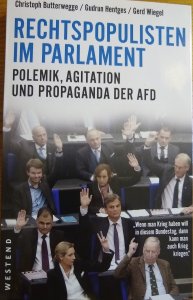 came to Vienna to give a paper at a conference. I told her I hope one day to read her book in translation. “Well” she said “do you know anyone who might translate it for me?”. I’m afraid I can’t help you with that one, I said….now, if it were written in Spanish, we’d have a partnership…..

Stefan himself works in the offices of the Green Party in Vienna so, with so much political talent and involvement, there was a heavy bias in the conversation around the table…..and the table itself has been abundant with Japanese fare one evening, and Viennese another, amongst which was this delicious dessert called Kaisershmarm, anecdotally named after Kaiser Franz Joseph I, who was very fond of fluffy shredded pancake.. 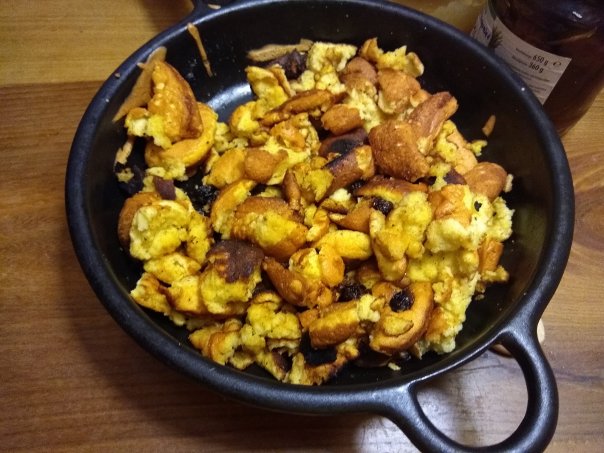 So tell me, what dish would you like named in your honour?

Posted on September 28, 2019, in Biking the Baltic 2,400km and tagged adventure cycling, bikes on trains. Bookmark the permalink. 4 Comments.