After completing the Via Fancigena (Canterbury to Rome) last September, I am about to revisit a journey that I last completed in 1993, but this time taking a different route. This sequel will be another ancient route of pilgrimage, established in medieval times on the belief that the body of the Apostle James the Greater was transported there after his execution, and buried at the spot where the magnificent Cathedral of Santiago now stands.

In medieval times, without the benefit of modern means of transport, pilgrims gathered at a local spot in their community, received a blessing for their journey, and then began the long dangerous walk that would take up to 6 months (not counting the return journey!). Although I will have the benefit of a pair of wheels, my plan is to depart from my home in west Cambridgeshire after receiving a blessing at my local church.

My route will take me down to Portsmouth, where I will catch the ferry to St Malo and, from there, will head towards the Atlantic coast, and follow the coastline to pick up the Voie Littorale at the mouth of the Gironde, and from there head down to the Spanish border. There I will pick up the most ancient of routes to Santiago, called the Camino del Norte (North coast route), used by pilgrims till the end of the 15th century when Spain had been occupied by the Moors, and all forms of Christian pilgrimage had been suppressed. The North Coast Route will link with the Camino francés (the French route) that will take me into Santiago de Compostela, a total distance of over 1200 miles. There I will present my “credential” (a passport that has been stamped along the way) at the Cathedral Office, they will ‘interrogate’ me to check that I have arrived under my own steam, and they will then (I hope) present me with the “Compostela”, a document written in Latin declaring that I was a bona fide pilgrim and successfully arrived in Santiago de Compostela.

If time permits, I will then cycle the 88 kms (54 miles) to Finisterre, one of the most westerly points of mainland Europe (so-called because, before Columbus discovered the Americas, it was thought to be the very end of the world) and I will pick up a scallop shell from the beach, the symbolic emblem of pilgrims across the world.

Why a Celtic route? My own family background is deeply rooted in the ancient Celtic traditions of Ireland. My 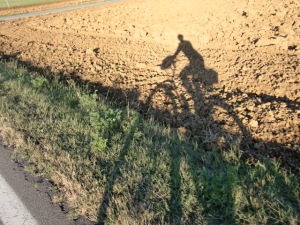 father’s ancestors were driven out of Ireland in 1840 by the famine, and came to Britain seeking work in the iron ore mines of Cumbria. My mother, on the other hand, was first generation Irish, born in the village of Cappamore in Co. Limerick. In planning this journey, I wanted to make connections with some of the pre-Roman Celtic places which lie along the western sea-board of the Continent. The region of Galicia itself, in NW Spain, has a history deeply rooted in the Celtic traditions (with clear evidence of this in their music, dance, use of bagpipes and outfits not dissimilar to what you see in Ireland). The name “Galicia” probably derives from “Gaul” (Roman name for Celts), the Gauls being gradually driven westwards by the invading Romans until they occupied all the most westerly points of continental Europe and the British Isles. Many historians also support the thesis that there was a major migration of British Celts across the Bay of Biscay to Galicia in the 4th-5th centuries, and they were given land in the area now known as Britonia, close to the north coast.

My route to Santiago will pass through Celtic Europe and, as I draw near to Santiago, I will visit some of the places that not only have evident remains of a Celtic past, but even now still celebrate ancient rites like the harvest festival of Lughnasadh on August 1st. It is also well documented that the cult of St James and the Camino de Santiago were developed on an already pre-existing route used by the ancient, pre-Christian Celts, called the Via Lactea (Milky Way) which led them to Cape Finisterre, the end of the known world. The ancient Celts dreamed of the mysterious beauty that must lie across the sea to the west, and their journeys along the Via Lactea were a quest to draw near to this land of perfection.