DISCOVERY OF FRANCE by Graham Robb

What caught my attention about this book was not just the title and its subject matter but, perhaps more importantly, the attributes of the author, Graham Robb. He is not only an academic and writer, but he is also a cyclist! And not just an ordinary cyclist (ie. one who simply jumps on his bike and goes for a ride), he actually used his bike to cycle 14,000 miles around France, over a 4 year period, in pursuit of his research for this book. Unjustifiably, perhaps, I 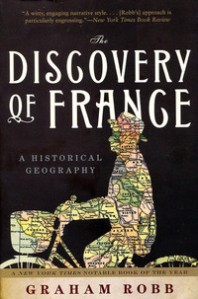 decided the book was worth reading……… and in the end, I was right!

In his introduction to The Discovery of France, Graham Robb makes an important confession. Despite almost a lifetime of academic interest in France and his writing of several serious tomes, he came to the conclusion that he didn’t really know France at all. What he knew of France, over the last couple of centuries, has been a vision of the country seen through the eyes of approximately 300 notable French people: writers, philosophers, artists, thinkers, playwrights, politicians and so on. In other words, a vision of France that had gone through several layers of filtration, had been re-interpreted and re-cast to provide an image that was seen fit to hand down to posterity.

So, like any broad-minded academic, he jumped on his bike and he went out to discover France for himself. Amongst the many fascinating discoveries, we learn that the use of the French language as a national language is a relatively recent thing. Even in the 19th century, communities living only a few kilometres from each other were likely to speak different languages. Which means that the vast majority of people living out in the countryside had no contact with, and were certainly not reflected by, the predominant channels of communication in Paris and the major cities. What Robb gives us is a picture of France through the eyes of the poor and dispossessed, the people who didn’t have a voice, but the very people who made up the majority of the French population.