Joining the ‘snowbirds’ in Florida

“No person shall operate a bicycle unless it is equipped with a bell or device capable of giving a signal audible for a distance of at least 100 feet, but no bicycle shall be equipped with, nor shall any person use upon a bicycle, any siren or whistle”…….

This extract from the Miami highway code is a clear warning to this unwary British cyclist, who is about to descend onto the land where Beckham is king of soccer, and where “It is illegal for men to be seen publicly in any kind of strapless gown”.

I booked my passage with Virgin Atlantic about three weeks ago, not only because it operates a direct flight to Miami, but it will also carry my bike free of charge (the only restriction being weight: it must be under 23 kgs). VA are definitely the most cyclist-friendly airline crossing the pond. They not only transport your bike free, but you can also have another 23 kgs of check-in baggage as part of your allowance.

At the time of booking the flight, I happened to be back in touch with my American friend, Bob, whom I had met in New Zealand, on a world trip with his wife, Cristine and 10 year old daughter, Anna.

Anna, Bob and Cristine had introduced themselves as the ABC family, and I was to share a few very pleasant days in their company as we made our way down South Island.

Hearing of my plans, Bob jumped at the chance of joining me for two weeks in Florida. He booked his flight from California and arranged for his bike to be shipped overland. He ordered maps from the American Cycling Association and did his research on the recommended circuit of the peninsula.

Working as a team against and unforgiving wind.

But then……(the best laid schemes o’ mice and men) little more than a week from departure, a prolonged dry winter in California suddenly changed, and the snows began with a vengeance. Bob and his family live at an elevation of 6000 feet near Lake Tahoe, and when the snows come at that height, it is serious business. Quite rightly, Bob had to reassess the situation. Flying down to Florida meant leaving Cristine and Anna to their own devices, coping with the routines of daily life midst the worsening weather conditions. So Bob has had to abandon his plans. He was profusely apologetic……..but he didn’t need to be. Though I will sorely miss his company, I did point out to him that it now leaves me in very familiar territory………riding solo and unsupported.

So, in a nutshell, my plan is to do a circular route of some 800 miles, carrying my little tent, and staying at the simplest and cheapest campsites I can find. I have been warned by many to beware not only of the traffic (which can be very heavy in the south), but also of the crocodiles, which can lurk motionless by the roadside. If you appear to be a tasty morsel at the time, they can achieve bursts of speed in excess of 30 mph. That’s when the 100″ gear will come in very handy!

What can a day reveal about Melburnians and their city? Did you know

that Melbourne led the way in admitting women to the Anglican priesthood and episcopate? Come on UK, you need to run harder to catch up! 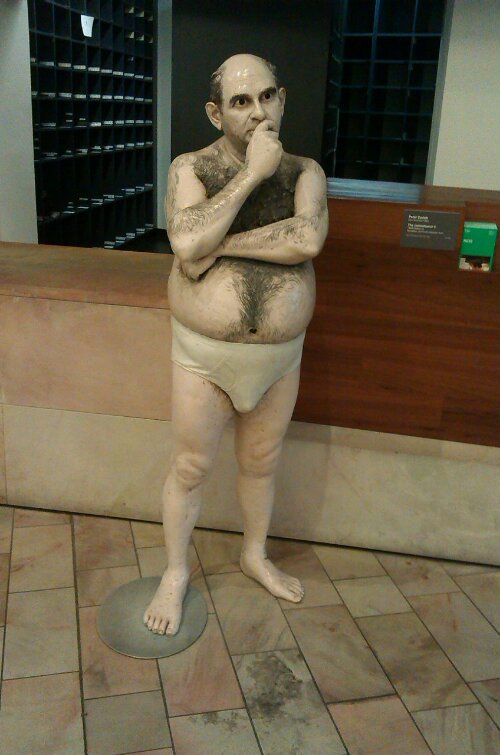 Not sure if this is a caricature of a typical Melburnian, but a lady receptionist has the doubtful pleasure of looking at it all day long from her desk just 2 metres away.

The Museum of Immigration gives an in depth insight into the migration of people into Australia over 200 years. But most poignant of all was a photographic account of the recent migration of the Irish during the current economic downturn

…a reflection of what my own mother did in the 1930s, and what my father’s ancestors did in 1840. I felt a certain vicarious empathy. 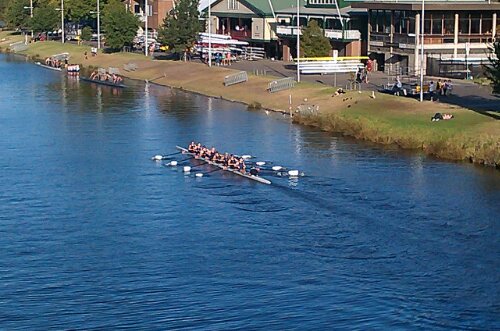 The River Yarra may not be one of those iconic city rivers, but it certainly has its own charm. 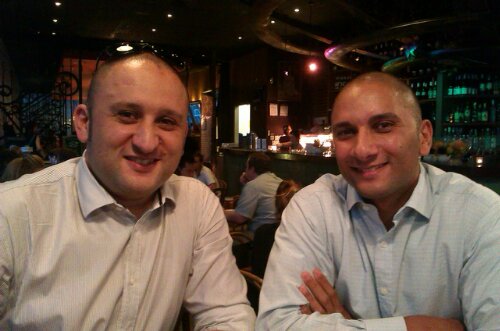 And a chance to meet up with fellow blogger Chris Yardin (left) and his brother Mark, and spend the evening sharing drinks and pizza 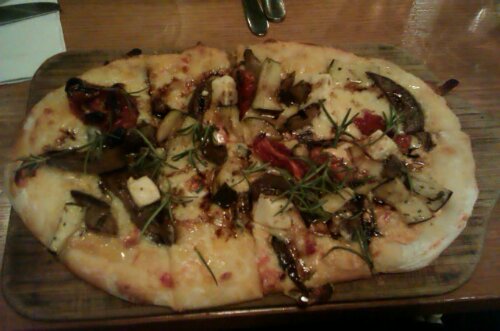 and chewing the fat over cycling issues the length and breadth of the sport. Thank you both for the invitation and for the generous donation to the Children in Syria Appeal. Catch Chris’ blog here: http://www.christopheryardin.com

The big question remains: will this man, when he climbs onto the plane this afternoon, be accompanied by his bicycle?
Stay tuned!
http://www.justgiving.com/Frank-Burns1

It is an understatement to say that Mallorca becomes the cycling capital of the world in the late winter/early spring. With the bad weather largely behind us, the roads were veritably clogged with pairs of legs pumping carbon-fibre (or alloy, as the case may be!). On the rainy day yesterday, few groups had been in evidence, but solo

cyclists like myself had been everywhere. Now the groups and clubs are out in force, fighting for road space. Road vehicles must be out-numbered by cyclists, at least by 5-1, and you note a certain respect amongst drivers for the pervasive presence of the pedal-pushers. They even stop on roundbouts to let pelotons take priority. Without a doubt, cyclists are the mainstay of the local economy during these dormant months of the season, and many of the locals do their little bit to make them feel welcome. 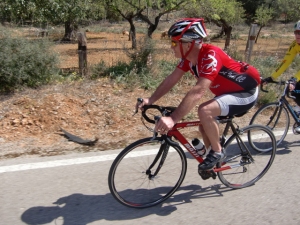 The threat of more rain dictated the route: stay on low ground and ´motor´ the miles. Direction south: across the albufera (the closest thing to fenland) following tiny country lanes to the ancient town of Sant Llorenc where (unbelievably) we found a cafe

in the plaza where we were the only cyclists! And the hunks of home-made cake were enormous! But they provided the power to the legs to take on a few challenging little climbs and justify a second stop in the village of Sineu, where most of us indulged in baguette sandwiches, big enough to ´pop´ your tyres under the added weight! And….yes…we did have a puncture in the group……. Now, a question: how many people are required to mend a puncture?…….. Well, in this case, five volunteered their services……a question of too many cooks….? Not at all……it was mended in a trice. 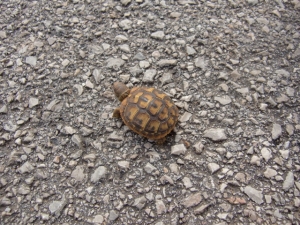 We managed not to squash this little tortoise!

A welcome little touch in each cafe are the segments of orange doled out in their dozens to thirsty cyclists. And free of charge.

Dishearteningly, the morning greeted us with overladen skies and another threat of rain. Everyone dressed for the part, hoping the worst would 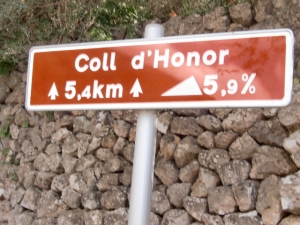 not be inflicted upon us. But our outward route was flat and winding, intertwining with dozens of other groups from the four corners of northern Europe (but mainly Germans) as we headed through Santa Maria to Bunyola. Our stop there, to fill the empty reserves after 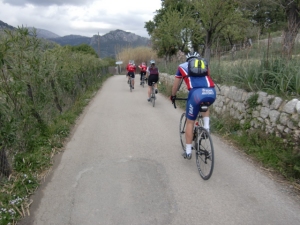 nearly 45 miles of cycling, was overshadowed a little with the knowledge of the enormous climb to come. The Coll d´Honor was to take us to 550 metres at an average gradient of 5.9%, then after a dip downwards, on to climb the Orient at 490 metres. These climbs break up the cohesion of any group, but after re-grouping at the top, you enjoy the long, very fast descent, frequently touching over 40 mph (60 kph). It is hard to adequately describe the sense of exhiliration………. 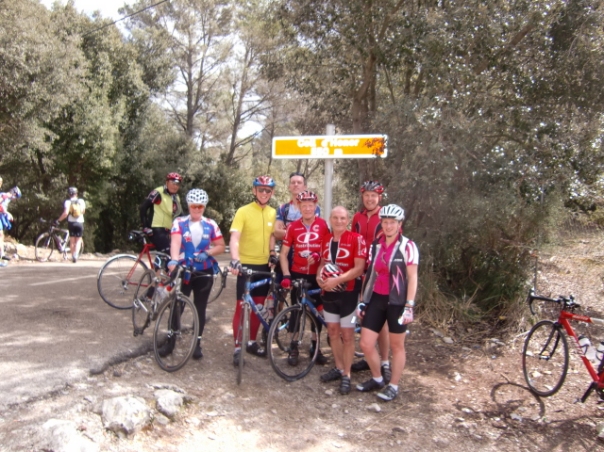