It is always a pleasure to get with people who have shared common experiences. The Confraternity of Pilgrims to Rome, as a group, is still in its infancy. Last Saturday they held only their 4th AGM since foundation, but there is obviously a very strong, committed core of support, with a membership that is growing rapidly. Still a long, long way from the dizzy heights of the success of the Confraternity of St James, but following it in its wake.

The first session, led by Via Francigena veteran Joe Patterson, provided interesting overviews of how to make your pilgrimage happen, covering all those necessary details from what boots to wear to how much luggage to carry. With several recent returnees from the VF in the audience, there was lively debate and many reflections on the ups and downs of long distance travelling.

Rome, which I had completed last September. Unlike all my presentations to date (to parish groups, Rotary and cycling clubs) I was standing before an audience who all had some experience of the VF, or were expecting to embark on their journey in the near future. I love telling the story of the journey……………and that is basically what it is………my story (or my tale). If I had been speaking to an audience of a 1000 people who had all travelled exactly the same journey, my own experience would have been unique, and so would everybody else’s. Furthermore, since the cyclist’s perspective (because most pilgrims walk) is rarely put across, I was delighted to be able to promote the use of two wheels to travel along this most ancient route.

Read more about the Confraternity.

Arriving back home and settling back into domesticity always requires some adjustment after such a venture. Even harder if you spend 80-90 days walking the route, and the rhythms of the daily schedule are much more ingrained in your psyche. 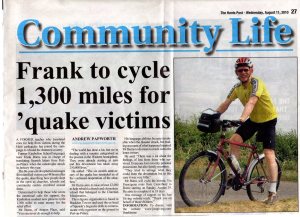 My journey has roused some local interest, especially in the press, and this has led to an invitation by BBC Radio Cambridgeshire to feature on their Sunday morning programme (October 17th) at 8.20am. I see this as a great opportunity to spread the word about the Via Francigena, and help promote it as one of the great European journeys where you can enjoy a sense of community as you travel along and associate with other pilgrims. 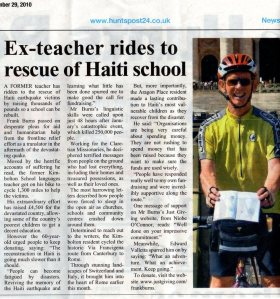 And you don’t have to do it as a single journey, from Canterbury to Rome. Why not try sections, as time permits. Everybody is subject to myriad commitments, so why not cherry-pick a couple of especially interesting sections and do them when you can? To qualify for the Testimonium at the end, walkers only need to complete 100kms, and cyclists 200kms. This could easily be completed in a week, allowing a couple of days to enjoy Rome.

Historically, we know for certain that Julius Caesar made the journey from Rome to England in 57BC, but apart from the verification that he had passed through certain locations (eg. over the Grand St Bernard Pass) exact details of his route are not known. Nor, too, are the details of the route taken by St Augustine when he travelled to Rome to recieve the pallium. We do know, however, that the Via Francigena was first mentioned in the Actum Clusio in 876, a parchment held at the Abbey of San Salvatore al Monte Amiata, Tuscany. At the height of pilgrimages in the 14th century, when holy years had been proclaimed (thus enhancing the spiritual benefits of such journeys!), droves of people from all over Europe made the journey to Rome.

It wasn’t until Sigeric the Serious who, having received his pallium in Rome, set off back to Canterbury, making notes of his return journey. His account is held in the archives of the British Library, and has become the object of recent academic research, thus helping to re-establish the route for modern pilgrims. Associations like the Confraternity of Pilgrims to Rome are working hard to foster a growing interest in such ancient, but forgotten, routes of pilgrimage, and hope that, one day, the route to Rome will develop into one of the well-trodden routes like the Camino de Santiago.

In true medieval fashion, I will begin my journey on August 29th outside my own front door, and cycle the 10 miles to St Hugh’s in Buckden, to receive a blessing for my journey after the first mass. My route will then take me to Medway near Gillingham, then on to Canterbury to attend Evensong at the Cathedral and receive a blessing from one of the Canons. The Via Francigena has a ‘kilometre zero‘ outside the Cathedral, and it is from this point I will begin the route to Rome, heading for the ferry at Dover. From Calais the route goes as follows:

Calais-Laon-Reims-Langres-Besancon-Lausanne-Grand St Bernard Pass-Aosta-Vercelli-Piacenza-Lucca-Siena-Rome. As a broad outline, this looks fairly straightforward, but the fascination will be discovering the smaller, insignificant places in between, and seeking accommodation in wayside monasteries, religious houses and hospices that will be sympathetic to the plight of the pilgrim. The infrastructure will be nothing like the Camino de Santiago, but it is travellers like me (and thousands to come in the future) who will help to pave the way to the growth of the network.

My trusty guide along the way will be the excellent Lightfoot Companion Via Francigena Canterbury to Rome by Babette Gallard, which gives extensive background notes to many of the places on the route.

Tags: Canterbury to Rome, Confraternity of Pilgrims to Rome, route, Sigeric, Via Francigena

The purpose of travel differs from person to person. In medieval times, the greatest travellers were usually pilgrims, who would set off on foot from their own front door in the direction of a distant holy place. They had to endure

not only the hardships of the journey itself, but also the ever present dangers of disease, hunger and highway robbers. Many died en route. Those that arrived at their destinations could not rely on Ryanair to take them home again. The only way home was back the way they had come, on foot. This is what we would call ‘travel with a purpose’.

Modern pilgrimage is a much more clinical experience, though not without its stresses and dangers. With the invention of the bicycle, another mode of transport is added to the duo of walking and horseback. On both the routes to

Santiago de Compostela and to Rome, the pilgrim must demonstrate they have travelled ‘under their own steam’ in order to qualify for the ‘Compostela’ or the ‘testimonium’. To do this, they have to carry a credential or passport, have it officially stamped along the route, and present it at journey’s end at the appropriate office.

The fascination of the ‘pilgrim’s progress’  is to travel in the footsteps/hoof prints of tens of thousands of others, along the very same route whose history stretches back 1000 or more years. In the case of the Via

Francigena, its history goes back 1400 years to the year 598 when St Augustine trekked to Rome to receive the pallium from the Pope. His return journey would have taken a minimum of 6 months, probably more.

archives, where the travel notes of Archbishop Sigeric, who travelled to Rome in 990, have been re-discovered and studied in depth. Although some place names have changed, and many of the traversable routes have been reconfigured, it is now possible to trace the exact same route as St Augustine in 598. Unlike the Camino de Santiago, which is now a well established and popular route of modern pilgrimage, the Via Francigena is still largely unknown, but beckons the modern pilgrim to pack his rucksack or pannier, and venture forth.

Via Francigena: Canterbury to Rome 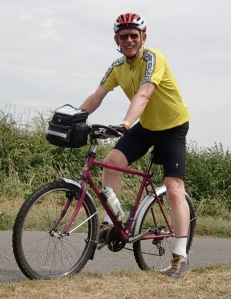 Many years awheel exploring the world, I am now addressing the most ancient of routes in Europe: the Via Francigena. First walked by St Augustine in 598 when he went to Rome to receive the pallium (his seal of office as the first Archbishop of Canterbury), it has recently been re-established using the travel notes of Archbishop Sigeric in 990 (one of the early bloggers!). Although I will have the benefit of a pair of wheels for my journey, carrying my pilgrim’s credential (passport) I will qualify for the official ‘testimonium’ given to pilgrims when they arrive at St Peter’s Basilica in Rome.

Following ancient routes, especially routes of religious and historical significance, has always been a passionate interest of mine. My forthcoming journey along the Via Francigena comes in the wake of several other long journeys, including the ancient Camino de Santiago de Compostela. So why am I doing it? Is it just for the sheer pleasure of completing it? Well, partly, but also read below:

January 12th saw Haiti (the poorest country in the west) suffer its most devastating earthquake. 230,000 died, along with 300,000 injured. The 6 month anniversary of the quake has reminded us of the conti 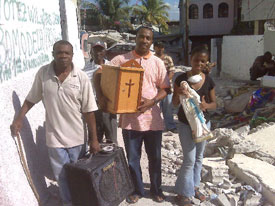 nued desperation of the situation.

For many years, we have supported the humanitarian efforts of the Claretian Missionaries in Belize. But on this one occasion, our attention deservedly shifts to the people of Haiti in their time of need. The Claretians in Haiti have spent several years building the infrastructure of their future work, which included an elementary school, which was completely destroyed. The money we raise through this venture will go directly to helping to rebuild this school.

I will be setting off on August 29th, and hope to arrive in Rome about 18 days later. Much more than a cycle ride, this will be a genuine atte

mpt to follow the route established 1400 years ago. I will be passing through places of historical connection, seeking to have my ‘credential’ (pilgrim’s passport) stamped and signed along the way, in order to qualify for the testimonium at journey’s end.

(I can now report that, at the end of all the fund-raising, we have been able to send £6,500 to help rebuild the Claretian Elementary School in Port-au-Prince. If you contributed to that amount, a sincere ‘thank you’ for your support)