Adjusting from the ‘high octane’ experience of riding across the continent, to the more sedentary experience of being back at home, requires both a mental and physical adjustment. On the 4 hour flight back home, unusually sitting in a window seat, my mind drifted over many aspects of the last six weeks, trying to re-visit various sections of the route, the places I stayed in and, above all, the people I met.

Perhaps the most unnerving moment of the entire six weeks came as we approached Heathrow airport. Coming into land, the approach was entirely normal, but about 20 metres above the runway, the jet engines ignited once again, and we swooped heavenwards. The climb was so steep that we were all thrust backwards into our seats, and you could hear gasps and whimpers around the cabin. We eventually levelled off and began to circle around for a fresh approach, when the captain came on the PA system and said: “Well, ladies and gentlemen, that was interesting, wasn’t it? It would seem that an Airbus hadn’t quite cleared the runway, so we’re having to make a fresh approach. So sit back and relax, and we should be safely on the ground in 10 minutes”. I heard one or two sighs of relief…….

As I was emptying my bags at home, I came across the personal cards of several people I had met, but in one or two cases, I struggled to remember who they were, and where I had met them. Fortunately I keep notes of every day’s ride, so dipping into my ride journal will probably solve a couple of mysteries.

On my last day, I met up with a friend of a friend, Burhan Sonmez, a Turkish Kurd, who has shifted from practising law to becoming a full time writer. He recently won the most prestigious literary award in Turkey (the equivalent of our Man Booker Prize) with his latest novel Sins and Innocents. He took me to Taksim Square, the scene of some recent major demonstrations against the regime, where several people were shot and thousands injured and imprisoned. He has a very interesting story to tell…….but more of that in another post, when I have had a chance to read his book.

Around the village I am greeted by many and sundry who welcome me back, ask me for a potted history of the ride, enquire where my next adventure will take me, and sometimes offer a donation for the charity I have been supporting. It is good to be back at home, with my wife, and amongst friends. And like so many things in life, we don’t fully appreciate them until we have been without them for a while. Your home environment and your daily routines take on a different hue; the comfort of your bed feels different, somehow; returning to your normal diet is like being reunited with your favourite armchair; turning on the 10 o’clock news to see the familiar presenters means that little has changed in your absence. We all need a bedrock in our lives. The only thing or person who has changed is, of course……you.

“…..the end of all our exploring will be to arrive where we started, and know the place for the first time” (T.S.Eliot Little Gidding)

Posted in Kimbolton to Istanbul 4000kms: a crusader's route 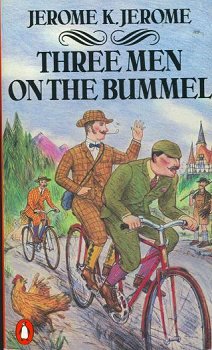 If you have already read Three men on a boat, you will see this little volume as a natural sequel. It brings back together the same three protagonists, but this time on bicycles and, instead of the river Thames being their ‘terrain’, it is the Black Forest in Germany. This book was given to me as a Christmas present (someone knows I like cycling!) but I was not only intrigued about the nature of cycle touring in the early 1900s, but also its location. Back in 1982, Jenny and I did a tandem tour of the Black Forest, a fascinating journey with the ‘earworm’ tune of A walk in the Black Forest constantly going through our heads! As we climbed a 12km hill one day, someone shouted in a strong northern accent (imitating some well-known chimpanzees selling tea): “Can yuh ride t’tandem, then? And we thought we were in the heart of Germany!

Jerome’s journey reflects the Victorian interest in the use of bicycles for touring, including discussions of the anatomical principles of saddle design (things never change!), brand competition and advertising, and the sheer logistics of setting off on a bummel (A German word meaning a long journey with no particular destination in mind). We also get a skewered glimpse of German society in the days of the German Empire, when it was clean, orderly and obedient to authority. If you enjoyed Three men on a boat, you will be intrigued by this, but don’t be disappointed if it doesn’t quite live up to its forebear.